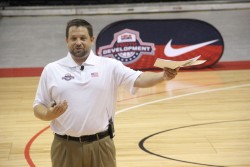 Charles “Hal” Wilson, Ph.D., assistant professor of coaching education in the School of Health and Kinesiology, was recently invited to be a guest speaker and on-court skills instructor by USA Basketball (USAB) for the Youth Coach Academy in Las Vegas, Nevada, July 19-22.

The academy is a four-day event that includes interactive sessions with coaches, guest speakers and networking events. Coaches learn the USAB youth curriculum, insights and education in regards to methods and techniques needed to teach the game of basketball to young people.

The academy also focuses on how individuals can implement fun, safe and feasible programming throughout various types of organizations.

“The relationship with USAB has led to current research projects into coaching issues and the Coach Academy itself with the full support and cooperation of USA Basketball,” said Wilson. “Our Georgia Southern students provided feedback to USA Basketball on their online coach licensure course in the summer of 2015, and approximately 40 of our students became licensed coaches through USAB in the fall of 2015 and spring of 2016, making Georgia Southern among the leading organizations in USA Basketball Coach Licensure in the country.”

Wilson has 20 years of basketball coaching experience from youth to major-college NCAA Division I levels. Along with his role at Georgia Southern, he serves the local community as a volunteer assistant coach for Bulloch Academy’s varsity girls basketball team.