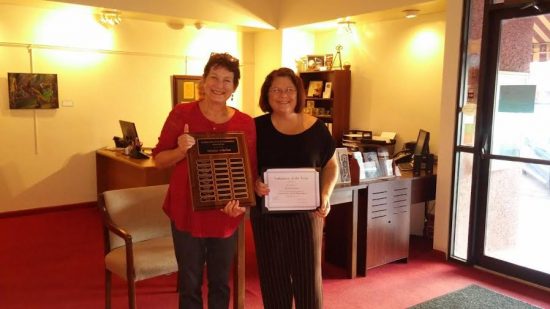 (R) Joanne Zanetos was recognized for her volunteer efforts by (L) Heather Heath, executive director of the Golden Isles Arts and Humanities.

Joanne Zanetos, DNP, MSN, RN, assistant professor in the School of Nursing, has been named the Golden Isles Arts and Humanities Volunteer of the Year.

Zanetos has more than three years of service with the Golden Isles Arts and Humanities Association and has racked up service hours at First Friday events, by selling tickets at Sounds by the Sea Concerts and by ushering for various concerts held at the Ritz Theatre.

After moving to Georgia from Ohio where she actively volunteered with the Columbus Symphony Orchestra League and the Columbus Symphony Orchestra Women’s Association, Zanetos knew she wanted to continue her effort to give back to the community. She got involved with one of her favorite causes to date, “The Big Read,” a National Endowment for the Arts initiative to encourage literary reading.

“I was stationed at a local thrift store passing out books to the local children,” she said. “I will never forget the face of a young red headed boy, maybe 6 or 7 years old. He was wearing clothes tattered and torn. The store gave him a shirt to keep him warm on that cool autumn day. I gave him the book, Huckleberry Finn. The boy looked at it opening all the pages. He looked like he was admiring it as if he had never seen or had one. I told him it was his to keep. He had a smile on his face from ear to ear. The child thanked me and held the book close to his heart. I will never forget him or his face.”

Zanetos uses her volunteer work as a way to give back to the community that has given her the opportunity to advance her career in the nursing discipline. During her time volunteering with the Golden Isles Arts and Humanities, she has met many individuals that she would consider worthy of the title, so she was surprised when she was named.

“I am honored to represent the community in achieving this award,” she said.

Zanetos’ winning plaque is on display in the Ritz Theatre in Brunswick, Georgia.