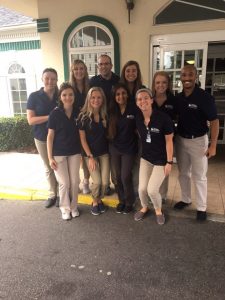 Each year, approximately one in four older adults fall. In recognition of National Fall Prevention Awareness Day (September 22 and the weeks surrounding it), a group of first- and second-year Doctor of Physical Therapy (DPT) students from Georgia Southern University Armstrong Campus joined physical therapy students from all seven accredited physical therapy programs in Georgia along with clinicians throughout the state in performing fall risk assessments on older adults.

“We wanted to go to places that are close to the Armstrong Campus,” said Dixie Edalgo, second-year DPT student. The close proximity allowed for students to be able to conduct assessments in between classes and helped to foster a sense of community near the Armstrong Campus.

Screenings were, in part, to answer the call for increased involvement of state academic physical therapy programs in screening activities, and to answer a call from Anne Lorio, a faculty member at Georgia State University, who lost her father due to the consequences of a fall earlier this year.

Many of the clinical programs offered by the Waters College of Health Professions require a clinical internship or practicum experience to fulfill degree requirements. Pursuant to the University's legal agreements, participants in clinical experiences are required to abide by the workplace rules of the clinical site. The University is aware of recent federal requirements that would mandate vaccination against COVID-19 for those working in certain settings, including health care. At this time, we expect that these new requirements may significantly impact our ability to locate a placement for students who remain unvaccinated. As always, WCHP will continue to make every effort to place students at clinical sites. However, please be aware that we may be unable to locate a site to accept unvaccinated students, which may cause a delay or inability to progress and complete the program of study.